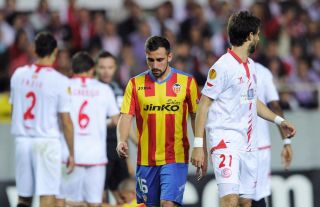 Salvo's club fell to two goals three minutes apart during the first half at the Estadio Ramon Sanchez Pizjuan, and the president did not hold back in blaming the men in charge from Slovenia.

But Salvo said UEFA got it wrong, and needed better quality referees for such a crucial clash.

"I don't understand how UEFA can put a referee from Slovenia, into a semi-final of this level.

"This has penalised a semi-final of the Europa League, with a team of officials from a country like Slovenia, where the football is what it is and where they don't face games of this magnitude."

Paco Alcacer received yellow in the 89th minute for a late challenge on Sevilla goalkeeper Beto, with the caution suspending him for the return leg in Valencia.

But Salvo said an appeal will be lodged, for what he believes was a soft card.

"We'll protest against it. It's difficult to get a rectification from UEFA, but they should at least do that, after a deplorable attitude from the officials," Salvo said.

Salvo did feel Valencia could fight their way into the final, though, with a two-goal deficit heading home.

"With what we'll experience at the Mestalla, this tie can be overcome and we'll make our way to Turin," he said.

Alcacer also expressed his dismay at being cautioned late on, and the striker slammed the Sevilla custodian for simulating contact.

"He's seen it clearly, I pulled my foot away and tried to stop making any contact," Alcacer said.

"We'll try to see if we can get the card rescinded. I have to play in the return leg at home. It's far from sporting what Beto has done, but he played his part."