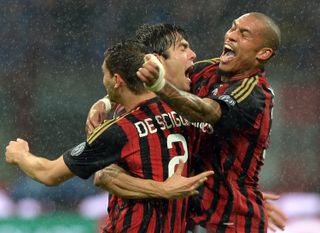 The 31-year-old, who re-joined the Serie A club from Real Madrid on transfer deadline day, put Massimiliano Allegri's side ahead in the 54th minute at San Siro with a stunning curling shot.

Although the goal was cancelled out by Mickael Ciani soon after to see the points shared, he was thrilled with his own performance and hopes that he may earn a place in Brazil's World Cup squad if he can maintain his form.

"I want to thank Milan for this second chance," he said.

"I have to keep improving several aspects of my game but I'm happy because there has been a big improvement since the game against Torino.

"I will keep trying hard and hope to get to the World Cup in Brazil and have a great one."

Kaka made his Brazil debut against Bolivia in January 2002, and was named in Luiz Felipe Scolari's triumphant World Cup squad alter that year.

He has gone on to make 87 appearances, scoring 29 goals, and last played for his country in a friendly against Japan last October.

The playmaker will now look to help Milan build on their disappointing start to the season, which has left them 10th, when they visit Fiorentina on Saturday.