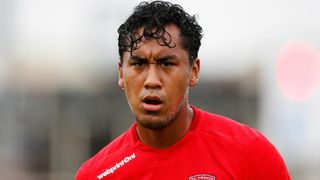 Renato Tapia has completed a move to Feyenoord from Twente on a four-and-a-half-year deal.

The 20-year-old midfielder has developed into a promising prospect during his time in the Eredivisie and had made 14 appearances for Rene Hake's side this season.

With Twente having been hit with a three-year ban from European competition, Tapia has chosen to pursue his career with a Feyenoord side who are battling for a return to the Champions League in 2016-17.

"He's a very talented boy, who already has the required domestic and international experience despite his young age.

"He's also a multifunctional player, though we see him mainly as a midfielder. He'll compete for that role at Feyenoord.

"We seem him as both a short and long-term gain - a player for the future who is immediately usable.

"We just have to wait until his work permit is in order, which can take several days. He therefore is not yet available for the upcoming matches against Heerenveen and ADO Den Haag."

Feyenoord boss Giovanni van Bronckhorst had said earlier this week: "I see him as a boost for Feyenoord. He's a great talent and has been playing for several years in the Netherlands.

"When the opportunity arose to bring him to Feyenoord, we were convinced we had to do so."

Tapia, who made his Twente debut in September 2013, had trained with Liverpool as a youngster and claimed last year that the Premier League side turned down the chance to sign him.

His move to De Kuip casts further doubt on the future of Colin Kazim-Richards, who was suspended by the club for threatening a journalist earlier this month.