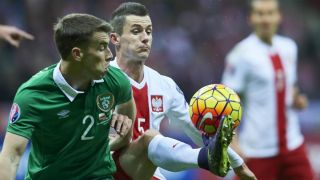 Seamus Coleman believes the Republic of Ireland "let themselves down" after they lost out on an automatic qualifying spot for Euro 2016 to Poland.

Martin O'Neill's side went into the clash in Warsaw knowing that a victory – or a score draw of 2-2 or greater – would have seen them leapfrog the Poles and seal a place in the finals in France.

Despite Jon Walters levelling from the penalty spot after Grzegorz Krychowiak's opening strike on Sunday, Robert Lewandowski's powerful header saw the home side triumph 2-1 to follow group winners Germany into the finals and leave Ireland facing the play-offs.

"We are all disappointed after doing brilliantly against Germany [in the last match]," Coleman said, as quoted by UEFA.com.

"We let ourselves down. We had the confidence and expected to win."

Ireland won three games on the bounce against Gibraltar, Georgia and world champions Germany to haul themselves back into contention in Group D and Coleman is eager for his team-mates to sustain some confidence for the play-offs.

"We have a big month now in November and we have to get going again," added the Everton full-back. "For periods of the group we would have snatched your hand off for a play-off place."

Richard Keogh missed a clear chance to equalise in the closing stages when he failed to connect properly with a header and the centre-back concedes he should have scored.

"It's obviously disappointing," the Derby County defender told RTE. "I thought the second half we played very well. We've got to make sure come November, we'll be ready.

"I tried to head it down towards the goal, but he's made a decent save. I probably should've scored."

Keogh believes that the loss of John O'Shea and Jon Walters through suspension could prove costly, adding: "When you lose two players like that it's disappointing. They're fantastic players, a lot of experience in the team.

"But whoever comes into the team will step up. We'll go away and dust ourselves down and be ready for November."

The draw for the play-offs will be held on October 18.