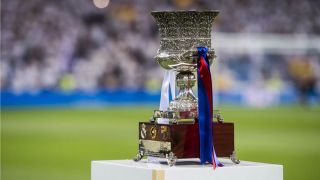 The Royal Spanish Football Federation (RFEF) has announced the 2018 Supercopa de Espana will be a one-legged match played at the Stade Ibn Battouta in Tangier.

Sevilla strongly opposed the plan for their match against LaLiga champions Barcelona when it was floated by the RFEF, with president Jose Castro saying: "We do not accept it."

But Spanish football's governing body has pressed on with its proposal and confirmed on Sunday that the game will be played in Morocco on August 12, with kick-off at 2100 local time (2200CET).

Sevilla play in the Supercopa de Espana by virtue of reaching April's Copa del Rey final, which they lost to league champions Barca 5-0.

This year's Supercopa clash will be a repeat of the 2016 meeting, which Barca won 5-0 over two legs.

Real Madrid won the 2017 trophy with a 5-1 aggregate victory over the Catalans.