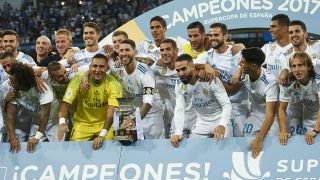 The Royal Spanish Football Federation (RFEF) has proposed staging the Supercopa de Espana as a one-off match at a neutral venue ahead of the 2018-19 season.

The move - described as "exceptional" by the governing body - represents a break with tradition, marking the first time the fixture will not have been played over two legs in the competition's current guise.

The RFEF made the proposal on Thursday as president Luis Rubiales, who sacked national team coach Julen Lopetegui on the eve of the World Cup, met with representatives from Barcelona and Sevilla - the two participants.

LaLiga president Javier Tebas has already spoken of his support for such a change, with Sevilla facing a hectic August schedule thanks to their Europa League qualifiers.

No venue has yet been identified to host the showpiece, which is slated to take place on August 12. Whatever the result, there will be new winners after Real Madrid claimed the trophy in 2017.

The clubs have been given until midnight to respond to the proposal.