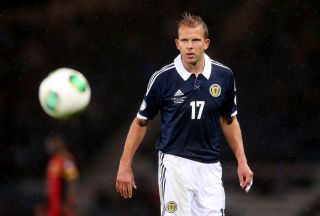 The Blackburn Rovers front-man had been called up as part of boss Gordon Strachan's party for the final Group A clash at Hampden Park next Tuesday. However, he has failed to shake off a groin problem and has now pulled out.

The news comes as a blow for the 23-year-old, who was set to win his 12th cap for his country.

Rhodes has been in good form for Blackburn so far this season, scoring nine times in the Championship to help Rovers to ninth in the table - with that form having led Strachan to suggest that he could be handed a start in the lone striker's role for the clash.

"He's got a better chance than most people because he is in the squad and he is scoring goals," Strachan had said when asked about the 15 October game. "He has a right good chance of playing next time we play."

Scotland sit fourth in UEFA Qualifying Group A, with their hopes of making next year's finals in Brazil already over following just two wins from their nine matches.