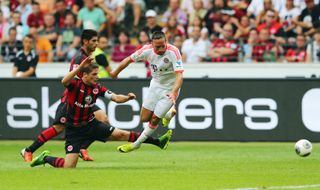 The French winger suffered an ankle injury during Bayern's 1-0 win over Eintracht Frankfurt last weekend, sparking fears that he could be set for a spell on the sidelines.

He missed training earlier this week, although the 30-year-old subsequently came through an individual session without any setbacks before joining up with the rest of the squad on Thursday and is now raring to go.

In a statement on their official website, Bayern confirmed: "The French winger resumed the squad programme on Thursday, completing the entire session without undue difficulty.

"He is therefore available for Saturday's Bavarian derby against Nuremberg."

Mario Gotze could also make his first Bundesliga appearance for the club following his move from Borussia Dortmund.

The Germany international is still not 100 per cent fit but featured on the bench for Pep Guardiola's side against Frankfurt.