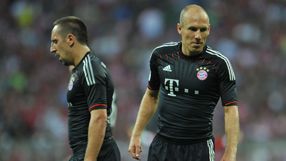 Bayern Munich winger Arjen Robben could make his return after a four-week absence when the Bundesliga leaders host Bayer Leverkusen on Sunday.

The Dutchman came through a full training session on Friday, although coach Jupp Heynckes was non-committal about his chances of facing Leverkusen.

"We must wait to see if he has got that far," Heynckes told Bayern's website. "He trained well, he is free of pain and he has gone through the whole programme."

The Dutchman agreed. "I have come through and that's the first step. But it doesn't make any sense to come back too quickly. First, I must be fully fit."

The bad news for Bayern is that French winger Franck Ribery, who has a thigh problem, and Spanish midfielder Javi Martinez (hip) are both doubtful.

Bayern have won their first eight games, the best start any side has made to the Bundesliga in its 50-year history.

Bayer Leverkusen's confidence has been boosted by their 4-0 win away to Rapid Vienna in the Europa League on Thursday.

"We are playing against a team that in the league have won all games. Nevertheless, we will try every year to get something out of the game," said sporting director Rudi Voeller, whose side are fifth with 12 points.

"We respect Bayern, which is the way it should be, but on a good day we are certainly able to cause them problems."

Werder Bremen's Czech defender Theodor Gebre Selassie has conceded that he has been slow in adapting to the Bundesliga following his move from Sloven Liberec.

"I know that I played better last year, but I still need to get used to the league," said Gebre Selassie who made an impression with his performances at Euro 2012.

"The players are much stronger than in the Czech Republic. Everything is more difficult. But I'm sure I can be good value. It's just a question of time."

Fuerth, 17th with five points, have lost all four home games so far without scoring a goal.

"We're just looking ahead," said coach Mike Bueskens. "A single goal could cast off the shackles."

The Bundesliga debutants came from behind three times to draw 3-3 at Hoffenheim in their last game.

Reserve team coach Lorenz-Gunther Kostner has taken over on an interim basis and will lead the team at promoted Fortuna Dusseldorf on Saturday.

He is expected to restore Diego to the team after the Brazilian playmaker was kept on the bench by Magath against Freiburg last week.

VfB Stuttgart will be without midfielder Tunay Torun for the next three weeks after he suffered a thigh injury in the Europa League match against Copenhagen. They host second-placed Eintracht Frankfurt on Sunday.