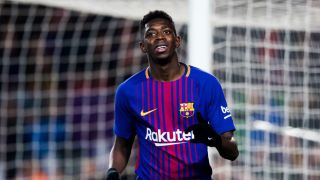 Roman Weidenfeller says an ungrateful Ousmane Dembele had "no manners" when he forced a move from Borussia Dortmund to Barcelona last year.

France international Dembele excelled in his sole season at Signal Iduna Park, scoring 10 goals in all competitions and attracting the interest of LaLiga giants Barca, who had just lost Neymar.

But Dortmund stalwart Weidenfeller was not happy with the way Dembele conducted himself as he sought the transfer, believing his behaviour to be "ridiculous".

"That's not the way to leave a club," the goalkeeper told ESPN of Dembele's departure. "It caused an unbelievable unrest and nobody could calm down.

"This is a team sport - football is not tennis. He did not even take his boots [before leaving] - it's ridiculous. Before, I could not imagine that there is such a thing.

"Dembele was given the opportunity to make a name for himself at Dortmund at the age of 19. Here, he developed into a player that Barcelona wanted to buy.

"But instead of being grateful, he left the club, staying at home, striking and letting his team-mates down. That's just bad style - no manners."

Dembele suffered a torn hamstring in just his second Barcelona appearance and has only now established himself as a regular at Camp Nou, scoring twice against Villarreal on Wednesday.