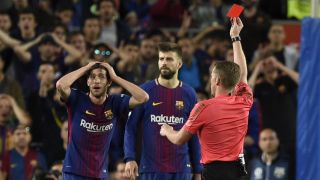 Barcelona's Sergi Roberto has been given a four-game ban following his red card in the 2-2 Clasico draw last Sunday.

The Spain international was sent off towards the end of the first half by referee Alejandro Jose Hernandez Hernandez after he appeared to strike Real Madrid full-back Marcelo in the face.

The Spanish Football Federation's Competition Committee has suspended Roberto for four games and fined him €3,005. Barca, meanwhile, have been fined €1,400.

The referee's match report claimed Roberto was sent off for "hitting an opponent with his arm, with the use of excessive force, the ball not being at a distance to be played".

It is reported Barca have already lodged an appeal against the sanction.

If the ban stands, Roberto will miss his side's final three LaLiga games of the season against Villarreal, Levante and Real Sociedad. He will also sit out the Supercopa de Espana against Sevilla at the start of next season.