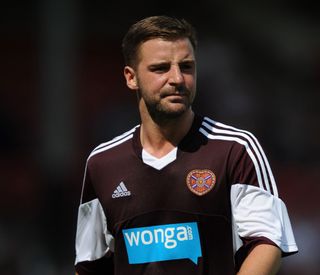 The 21-year-old midfielder was substituted at half-time for the second successive week as Hearts slumped to a 2-0 defeat against St Mirren on Saturday.

After the match, Robinson vented his anger, saying that he felt he was being picked on by manager Gary Locke and that he had lost his confidence.

An incredibly open Robinson told the Evening News: "On Saturday there, I think it was a case of 'I'll just pick on him again and take him off'. I didn't think I was the poorest out of the midfield four."

Emotions have run high at Hearts this season, with the club struggling in their fight for survival in the Scottish Premiership.

Hearts started the season with a 15-point deduction and have wiped just eight points from that margin in the first nine matches.

Robinson has backed away from his comments though, claiming they were made in the heat of the moment.

"I was very emotional after Saturday's game and perhaps I should've taken a moment to think about what I was saying," he told Hearts News.

"Certainly, I was upset about being subbed off but any footballer worth their salt would be too as we just want to be the best all the time.

"I don't feel like the manager's singling me out for unwanted attention, I absolutely know that. The gaffer has started me in every single match this season and that wouldn't happen if I were being picked on."

Locke said he had accepted Robinson's version of events and called on the player to learn from the incident.

"I've spoken with Scott and the matter has been dealt with behind closed doors," he said.