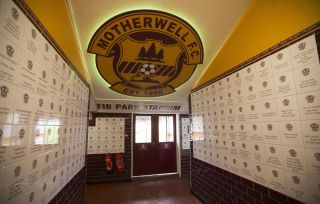 Motherwell manager Stephen Robinson praised his team’s “terrific” play despite being held to a goalless draw by Hibernian.

Hibs goalkeeper Ofir Marciano produced a brilliant save to tip substitute Christy Manzinga’s 79th-minute strike onto the bar as Motherwell pushed for a winner.

The hosts dominated possession and territory but missed ill winger Jermaine Hylton and centre-forward Christopher Long, who failed to brush off an ankle knock.

Robinson’s side moved five points clear of Aberdeen in third place in the Ladbrokes Premiership but the Dons play St Mirren on Sunday.

“I thought we were terrific, dominated the game but just didn’t have that final touch,” he said.

“You have to give credit to their goalkeeper, it was an incredible save.

“But some of our build-up play, our midfield three, was terrific. Look at the resources we have got and to dominate like that against a team of Hibs’ quality and keep their front four quiet, our boys deserve a lot of plaudits.

“Sometimes the performance doesn’t get the result it deserves but after the week we have had, I can’t be critical of them. Three points at Aberdeen, into the next round of the cup, and a real dominant performance.

“Credit to Hibs, they stuck in, were organised and hard to break down but we should have had the three points.”

Hibs head coach Jack Ross was delighted with his makeshift back four after losing another defender on top of knee-injury victims Jason Naismith and Ryan Porteous.

“We have had to make a lot of changes, the two serious injuries and David Gray was ill,” Ross said.

“It’s testament to the character of the group but also to players like Adam Jackson and Tom James, how they have trained in the interim period has been really good.

“They have been ready to go and produced good performances that helped us pick up a win during the week and a point here.

“We came to try and win the game, I think you can tell that from our starting line-up, but the way the game panned out, I think it’s another point in the right direction for us.”

Ross was also delighted with his goalkeeper.

“He’s not had a huge amount of saves to make in recent weeks, so the pleasing thing as a group was that we got a tangible reward and a clean sheet,” he said.

“But that’s arguably his biggest strength, his shot-stopping. That can win you points and games. It was an important one so late in the game.”

Meanwhile, the former Sunderland manager was baffled after receiving a first-half yellow card.

“I just asked a question without swearing and raising my voice,” he said.

“The rules must have changed. I’ve been out of the country obviously so now dissent must be different. I will learn not to ask questions anymore.”