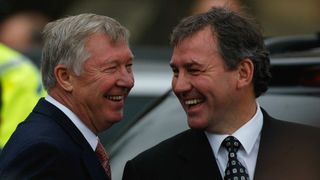 Former Manchester United captain Bryan Robson is the latest to pay tribute to Alex Ferguson as he recovers from a brain haemorrhage.

The 76-year-old is recovering in Salford Royal hospital after undergoing emergency surgery on Saturday.

Messages of support have been sent from across the football world, including from former United stars Cristiano Ronaldo, Wayne Rooney, David Beckham and Rio Ferdinand and clubs such as Liverpool, Manchester City and Barcelona.

Robson admits the news came as a shock, with his old United manager having looked in good health and spirits last Sunday, when he led a special presentation at Old Trafford to honour Arsenal manager Arsene Wenger's career.

However, the ex-England star, who overcame throat cancer in 2011, hopes the successful surgery will lead to a complete recovery.

"It did come as a big surprise and a shock," Robson told Sky Sports News.

"From what I've heard, the operation went well and so hopefully the boss will have a full recovery. That's what everybody would really wish for.

"It just shows if you've got various problems with headaches or you're feeling out of breath, you need to go and get checked up. Early detection is probably the best cure.

"Hopefully, they found the bleed on the brain early enough and it doesn't affect the boss in any way."

Robson joined United in 1981, five years before Ferguson took over as manager, but he enjoyed his most successful spell with the Scot in charge, winning two Premier League titles, two further FA Cups and the 1991 European Cup Winners' Cup.

The former club captain thinks Ferguson deserves to be acknowledged for his career but also described his personable side.

"Everybody respects him highly for what he did in the game," he said.

"Everybody thinks it was all this hairdryer treatment and all that sort of thing, but he enjoys a good time.

"He loves his racing and when he goes there he really enjoys it and he's good company when you're around him."