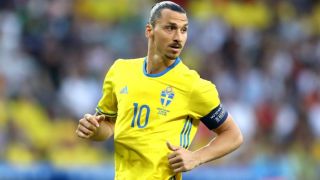 The former Sweden captain, who retired from international football after Euro 2016, signed a one-year contract at United with the option for a second after firing Paris Saint-Germain to a second domestic treble in a row in 2015-16.

Ibrahimovic scored 50 goals in all competitions last term but, with the forward turning 35 in October, some doubts have been raised over whether he can sustain such prolific form in his first year in England's top flight.

But Robson hopes to see him replicate the stunning Premier League campaign enjoyed by Van Persie in 2012-13, when he registered 26 goals and 15 assists to fire Alex Ferguson's side to the title after joining from Arsenal the preceding August.

"Zlatan is 34 and it would have been nice to get him at 28 or 29, something like that, but the way he played for PSG last year showed he has a lot to offer still and he looks really fit," he told MUTV.

"I think back to Sir Alex's last year when everybody talked about Robin van Persie's age and his injuries when he joined, but he won us the title with his goals that season. Hopefully Zlatan can do the same."

Robson also hopes that Ibrahimovic's arrival can take some pressure off the shoulders of skipper Wayne Rooney, whom he feels has been unfairly scrutinised for his form.

"Every time we've had a bad result the excuse is that Wayne didn't play particularly well," he said.

"The pressure has always been on him to perform and Zlatan will take that away from Wayne a wee bit, so Wayne can relax and enjoy his game."

Former United midfielder Ji-sung Park expects the charismatic former Barcelona and Inter forward to have a huge impact on the young players at the club.

"I think the club needs a big character like him," Park said. "He has a lot of experience and then he can show his character in the dressing room and on the pitch.

"He can influence the players and particularly the young players. They can learn a lot from him and then show it on the pitch."