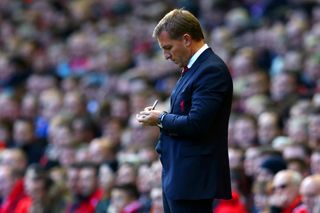 The Italian striker has struggled since his arrival from Milan in August, having found the net only once in 11 outings for the club.

The former Manchester City man retained his place in Rodgers' starting XI on Saturday but missed two glorious chances to score the winner, including one in the final moments at Anfield.

However, the Liverpool boss was pleased with the 24-year-old.

"It was a big chance and we had one or two of those in the game but we couldn't quite put the ball in the net," said Rodgers, referring to the late chance.

"I thought he worked very well and very hard. He maybe thought he wasn't going to play today but you've got to stay with it. You've seen he is working hard and at the moment he is doing his best.

"Unfortunately it's that wee bit of confidence, sometimes when you don't get that goal, that he might lack a little. But he kept going, kept getting into the [right] areas and I thought he and Rickie Lambert worked well when [Lambert] came on.

"I'm a little bit frustrated we didn't win the game but performance-wise I'm happy and our reaction to the midweek game."

A win would have been Liverpool's third top-flight victory in a row but the hosts were unable to break down a resolute Hull backline.

With the injured Daniel Sturridge some way off returning, Rodgers feels Balotelli's workrate off the field will stand him in good stead to lead the line for Liverpool.

"I've only been working with him a short period of time and I gauge it first and foremost on the training field," he continued.

"Sometimes, when it's not going well, players will have a day when they don't train or work. But he puts himself out to train every single day.

"He's out there wanting to be better, wanting to improve. It's just not quite happening for him in terms of [scoring].

"You saw today, he worked very hard. He knows he needs to run and work and press here. He was just unlucky really that he didn't get the goal."