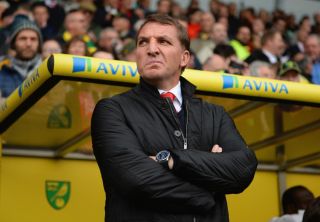 Sunday's 3-2 win at Norwich City saw Rodgers' men move a step closer to a first top-flight title since 1990 and Liverpool's blistering form over recent weeks has been based on an attractive, expansive brand of football.

And the former Swansea City boss says that sense of freedom has been the key to his team's success this season.

"We say to the players every day: be at your best," he said.

"In the changing room before they go out, we just remind them to go and lose themselves, just focus on the ball and focus on the team.

"If you can do that, together we can be a real force.

"You saw all the characteristics of our team (against Norwich) - wonderful invention, creativity, arrogance on the ball, young players and senior players all playing in a structure that allows them to express themselves.

"And they had to show the courage to dig in and fight, away from home against a team that's fighting for their life to stay in the division."

Next up for leaders Liverpool - who have won 11 league games in a row to go five points clear with three games remaining - is an Anfield clash with second-placed Chelsea next Sunday.

Rodgers added: "It's going to be a brilliant game next weekend. The supporters will be right up for it, the team will be and we look forward to it.