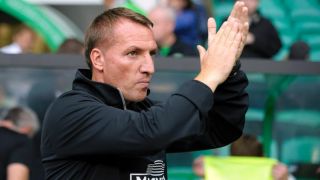 Celtic manager Brendan Rodgers hailed his side's "outstanding result" after securing a 1-1 draw at Astana in the first leg of their Champions League qualifier.

Rodgers and Co. travelled to Kazakhstan for the third-round tie after getting past Lincoln Red Imps 3-1 on aggregate last time out.

Things did not start the way Rodgers would have wanted against Astana, with Yuri Logvinenko giving the home side the lead, but Celtic struck back late in the game.

Leigh Griffiths netted the crucial goal with 12 minutes remaining, giving Celtic the advantage on away goals ahead of next week's return leg in Glasgow.

"It was an outstanding result for us. Collectively the mentality was the most pleasing thing," said former Liverpool boss Rodgers.

"I think we were all written off before the game, everyone pretty clear in their opinion of the game, that we would do well to come back with anything other than a loss, but the players deserve an immense amount of credit, to fight and show spirit and passion in the game.

"The resilience and strength that we have built up over the course of the pre-season came into effect.

"I was disappointed with the goal, it is nothing new, but we showed a wonderful mentality to keep fighting and in the second half we restricted them to not so many clear chances and ended up scoring a fantastic goal.

"It is only half-time but [it is] a very important result for us."

Rodgers also hailed 20-year-old Irish centre back Eoghan O'Connell, who put in a good shift in his Champions League debut.

"I thought he was outstanding," the 43-year-old added. "For a young player, he has been on the fringes for a few years, coming into that environment, under pressure, he had very few mistakes in the game.

"You would expect him to make some as a young player but he coped in a very difficult situation."