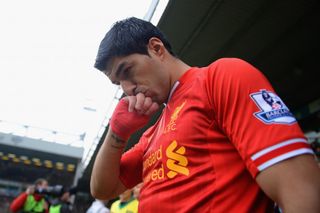 Suarez was subject of interest from Arsenal in the close-season, but agreed a new deal at Anfield in December after previously publicly stating his desire to leave the club.

The Uruguayan has duly enjoyed a stunning campaign at Liverpool, scoring 30 Premier League goals to guide Rodgers' side to the top of the table and winning the PFA Player of the Year award for his efforts.

Liverpool are already assured of a return to the UEFA Champions League for the first time since 2009-10 next term - and Rodgers is thrilled Suarez will have the opportunity to shine at the highest level.

"A player of Luis Suarez's ability has to be playing at this level," the Northern Irishman said.

"His loyalty in staying at Liverpool, to continue to fight for the club to get us there, is remarkable really.

"Hopefully he gets the rewards for that with those big European nights next season."

Suarez was handed the PFA award on Sunday - just a year after his name was booed at last season's ceremony following his bite on Chelsea defender Branislav Ivanovic's arm.

The 27-year-old was banned for 10 matches for the incident, but Rodgers feels Suarez's intelligence on and off the field is often overlooked.

"I'm interested in the person as much as the player. From the first year, he knew I would shape the team around his qualities. The way we set the system up is to be technical and intelligent," he added.

"Probably what people don't see with Luis is that he's a very, very highly intelligent man off the field - and maybe sometimes in the past that intelligence on the field hasn't been seen so much - but that imagination is part of how we work.

"I love players that have that technical ability. That's what we've built our template on over the past 20 months and he's at the top end of that."