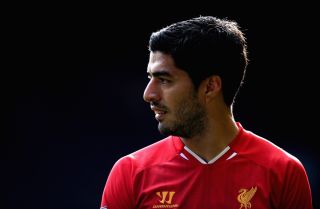 The 26-year-old's future with the Premier League side was surrounded by uncertainty in the close-season, with Arsenal and Real Madrid both linked with moves for the wantaway striker.

However, after committing himself to the Anfield side, Suarez has since returned from a 10-match ban for biting Branislav Ivanovic to make a big impact this season, netting three times in his last two league appearances.

And Rodgers is thrilled with the Uruguay international's contribution.

"With Luis, he demands the best from himself and his team-mates at all times, and we saw that against Crystal Palace (a 3-1 win last weekend), even right at the end when the game was won," Rodgers told the club's official website.

"You see his work-rate and his demand for a better ball into the box, and that's what we want.

"I think it's much easier to keep on performing well and, if you do lose, then you can still go into the next game with confidence.

"We did at Manchester United - we may have lost there, but we played really well, and that gave us the belief to go into the next game at Sunderland with the right attitude.

"But if your standards slip and you start losing one or two games, it's a lot harder to get back up to the level again.

"With the likes of Luis, that demand is what we want - the demand that we maintain our standards at all times. It is an important part of what we are trying to do."