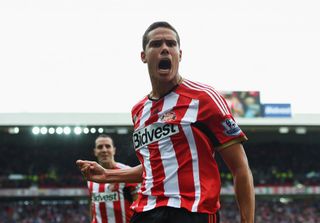 Rodwell moved to the Stadium of Light from Manchester City in August, ending a spell at the Etihad Stadium that saw first-team appearances prove hard to come by for the former Everton man.

The 23-year-old has featured in eight of Sunderland's nine games in all competitions this season, though, and feels he is edging closer to reaching peak condition.

"The first few games, you're just feeling your way in and getting your fitness – I still am," Rodwell told the Sunderland Echo.

"But I am feeling better each game, and, after the international break, hopefully I will be back to 100 per cent.

"I got to start three games in a week, with the matches against Burnley, Stoke [in the League Cup] and Swansea.

"That was tough. I felt a little bit tired in the last game, to be honest, probably due to the effects of the back-to-back games beforehand.

"But I'd felt good after my first full 90 minutes against Burnley, physically OK.

"For me, playing three games in such a short space of time, physically, was tough.

"I'm happy with the progress and I know I'm getting there."

Having played three matches in quick succession, Rodwell was left out of Sunderland's starting line-up for Saturday's 3-1 win over Stoke City, featuring only as a late substitute for Sebastian Larsson.