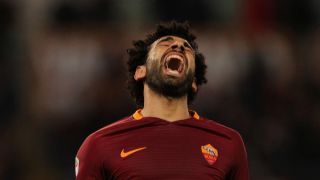 Roma returned to winning ways at the Stadio Olimpico by beating Sassuolo 3-1 in Serie A on Sunday to reduce Juventus' lead at the top of the table to eight points and move back up to second.

Luciano Spalletti's men saw a 15-game winning run at home ended by Napoli on March 4 but made a fast start this time around and Mohamed Salah almost opened the scoring in the second minute, the Egyptian capitalising on sloppy Sassuolo passing to force a good save from Andrea Consigli.

But it was the visitors who took the lead with a stunning counter-attack after eight minutes, Gregoire Defrel placing a shot into the top-right corner after being picked out by Domenico Berardi.

However, Sassuolo's advantage lasted just seven minutes before Leandro Paredes drilled an angled drive home from the edge of the area after being teed up by Salah.

Emerson thundered a shot against the crossbar as the game's sensational first half remained wide open, and Roma took the lead moments before the interval when Salah scored his 10th league goal of the season on the rebound after Consigli saved from Stephan El Shaarawy.

Edin Dzeko wrapped up the win for Roma in the second half just eight minutes after coming off the bench, beating Consigli from close range after a one-two with Kevin Strootman, to keep Roma on Juve's tail and extend their unbeaten run against Sassuolo to eight matches.