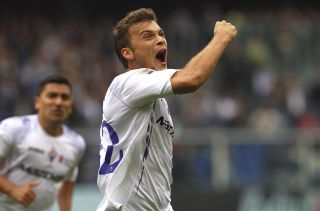 The Serbia international signs a four-year deal at the Stadio Olimpico, after a near three-year stay at the Florence outfit.

Roma will pay an additional €4million to their Serie A rivals, dependent upon Ljajic and Roma's achievements during his time at the club.

The 21-year-old has been linked with several clubs throughout the transfer window, including Premier League sides Liverpool and Tottenham.

But he has decided to continue his development in Italy with Rudi Garcia's side.

Ljajic started his career at Partizan Belgrade, making 57 appearances and scoring 12 goals after making his debut at the age of 17.

A move to Manchester United collapsed in 2009 as he failed to gain a work permit, with the playmaker eventually moving to Fiorentina in January 2010.

He scored 11 goals in 28 appearances for the club last season, as Fiorentina finished in fourth position in Serie A.

Ljajic fell out with both Sinisa Mihajlovic and Delio Rossi during their times as manager at the Stadio Artemio Franchi, with the latter attacking him on pitchside after the Serbian sarcastically applauded the decision to substitute him in a May 2012 match with Novara.