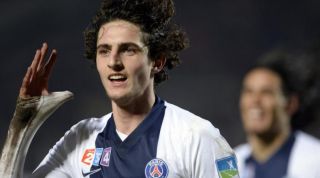 Rabiot has been continually linked with a move away from the Parc des Princes, with Roma stating last month that they are interested in luring him to the Stadio Olimpico in January.

The 19-year-old, whose contract expires at the end of the campaign, has been limited to reserve-team action for PSG this season and is keen to secure a move to the Italian capital that he has stated was all but completed in the close-season.

"It [a move to Roma] should really have been done this summer," Rabiot told Canal Plus.

"I don't understand why I am not there.

"I heard that I wanted to leave because of competition [at PSG] but that's not it.

"Roma is another sports project with the Champions League but now it's on standby. We'll see in the coming weeks what can happen."

Despite his enforced absence from the first-team, Rabiot insists there is no dispute between himself and coach Laurent Blanc.

"I am at the disposal of the club," he added.

"It is not my choice to play in the CFA [fourth-tier].

"There is no problem between the coach and me. He means well and has often told me he would like to find a quick solution.

"If you want to punish me, this is not the way to do it. Training, playing in the CFA, no, this is not a punishment for me."