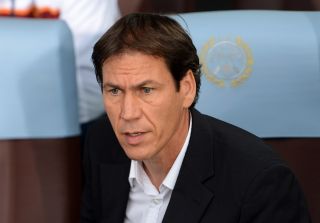 It will be a case of top versus bottom in the Italian top-flight on Thursday as Garcia's high-flying side welcome lowly Chievo to the Stadio Olimpico.

Despite their stunning winning streak to open the campaign, the French coach voiced his disappointment with their recent form - a 1-0 win at Udinese and a 2-0 home win over second-placed Napoli.

"Well, I believe our performance has decreased in the last two matches against Napoli and Udinese," Garcia said.

"We have to be focused and improve our way of playing. This team still has room for improvement.

"At the same time we should not forget that the players on the pitch usually make a very good job, but in order to find the right rhythm they may need to play two or three consecutive matches."

Garcia went so far as to claim the league leaders would be tested the most by the Serie A cellar-dwellers.

"Thursday's match may be the most difficult match since the beginning of the season because Chievo usually makes a good performance," he said.

"It's strange to see them at the bottom of the table. It's always difficult to play against them.

"The problem is that everyone believes that we have already won this match, but we'll only be able to win it if we'll be humble, if we play at 100 per cent and make a good collective performance.

"We should show our usual willingness and determination."

Roma will be boosted by striker Gervinho regaining fitness, though his return may not come until the weekend, according to Garcia.

"We still have two training sessions in order to check Gervinho's condition," he added.

"He managed to run and is doing well. We'll see if he can play on Thursday.

"If not, he will be available for Sunday's match (away at Torino).

"In any case, I believe his conditions are good, he recovered to almost 100 per cent."