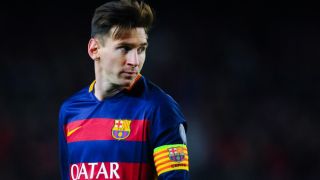 Barcelona president Josep Maria Bartomeu has hailed the impact of Lionel Messi and claimed "Ronaldinho made us global and Messi has made us universal".

Messi is the hot favourite to land a fifth Ballon d'Or award in Zurich on Monday, ahead of team-mate Neymar and Real Madrid's Cristiano Ronaldo.

Argentina captain Messi, Barcelona's all-time leading goalscorer, is the "best player in history", according to Bartomeu, who is expecting the 28-year-old to continue to lead the club to glory domestically and in Europe.

He told La Repubblica: "Messi deserves everything. He is the best player in history; the statistics say so and he isn't going to stop here. There has never been a player like him in history and nobody will ever exceed him.

"We have had great players before, from the days of Laszlo Kubala and Luis Suarez. [Johan] Cruyff, as a player, made us relevant again and as a manager he put us on the map with the European Cup win in 1992. Ronaldinho made us global and Messi has made us universal.

"We don't want to win in just any way. This is the Dutch school of [Rinus] Michels, Cruyff, [Louis] Van Gaal and [Frank] Rijkaard. At the centre of every decision is the ball; if you treat it well, you will be rewarded. We are a global club, respected and admired, with the mission to entertain.

"When I am abroad people say to me: 'I'm not a Barcelona fan, but they captivate me.'"

Messi is part of a fearsome three-pronged attack at Camp Nou alongside Uruguayan Luis Suarez and Neymar, with the trio helping Barca to a Liga, Copa del Rey and Champions League treble last season.

Neymar has been tagged as the successor to Messi as Barca's main man and Bartomeu is confident he will remain in Catalonia despite speculation linking him with Manchester United.

He added: "He will be at Barca for the longest period of time possible. He feels loved here and nobody will take him away from us."