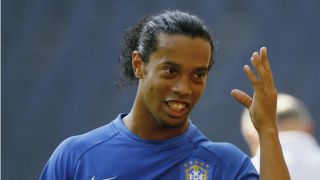 Brazil great Ronaldinho will officially retire from football this year, with plans already underway for a farewell schedule of games.

The ex-Barcelona favourite and 2002 World Cup winner said last month he expected to say goodbye to his playing days in 2018, having last appeared competitively for Fluminense in 2015.

In an interview with Globo, Ronaldinho's brother and agent Roberto Assis confirmed this would indeed be the case, with a world tour in the works.

"We'll do some events now around Brazil, Europe and Asia. Of course, we're also arranging something with the Brazil national team as well.

"Nike [Ronaldinho's long-time sponsors] will be with us together on this project, there are no details yet.

"For now we're arranging a programme, a schedule. The fact he's been Barcelona's ambassador for 10 years now will help a lot abroad. He's held in the highest regard there.

"There are now three arranged events - Mexico will be the next one, on March 1."

Ronaldinho was capped 97 times by Brazil, scoring 33 goals – including two en route to World Cup glory in Japan and South Korea in 2002.

He joined Paris Saint-Germain from Gremio to begin his European career, which flourished spectacularly at Barcelona between 2003 and 2008.

Ronaldinho inspired back-to-back LaLiga triumphs in 2004-05 and 2005-06, also winning the Champions League in the latter season.

He was at the peak of his powers as he claimed the Ballon d'Or in 2005; less so during a three-year stay with AC Milan, although he did feature in all-star line-ups alongside the likes of Paolo Maldini, Kaka and David Beckham.

Ronaldinho left San Siro midway through the Serie A title-winning 2010-11 season and returned to his homeland with Flamengo. He also experienced stints at Atletico Mineiro and in Mexico with Queretaro.