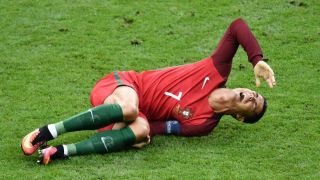 Portugal captain Cristiano Ronaldo has been withdrawn from the Euro 2016 final due to a knee injury sustained in the opening minutes at the Stade de France.

Ronaldo received treatment on his left knee after a crunching tackle from France winger Dimitri Payet.

The Real Madrid star returned to the pitch, but looked in obvious discomfort and left the field in tears to get his leg strapped up.

8 - Cristiano Ronaldo made just eight touches in the final before being substituted. Depart. July 10, 2016

After valiantly trying to play on, he was replaced by Ricardo Quaresma with just 24 minutes on the clock and the score 0-0.

The Portugal captain once again broke down as he had to be stretchered off the field.

As Portuguese fans stood aghast, the home support rose to give him a rousing ovation, with France coach Didier Deschamps also wishing the 31-year-old well as he was carried past him.

Ronaldo came into the final as Portugal's top scorer, and another goal would have taken him beyond the record tally of nine European Championship goals he holds jointly with Michel Platini.