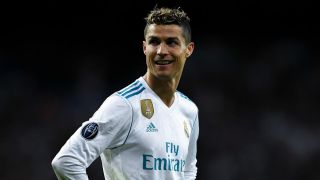 Cristiano Ronaldo insists it is pointless comparing him with Liverpool star Mohamed Salah as they are "completely different" players.

The two forwards will go head to head on Saturday when Jurgen Klopp's side take on Real Madrid in the Champions League final in Kiev.

Salah has enjoyed a record-breaking first season an Anfield, becoming the first player to score 32 goals in a 38-game Premier League campaign, while he has also netted 11 times in Europe.

Ronaldo, meanwhile, recovered from a difficult first half of 2017-18 to match Salah on 44 goals in all competitions, with 15 of those coming in Madrid's run to a third consecutive Champions League final.

However, the 33-year-old insists he should not be compared to Egypt international Salah as they are different types of forward.

Ronaldo could become the first player to win the modern tournament five times with a victory this weekend.

The former Manchester United man is desperate to lift the trophy once more but says his "legacy" in football is safe regardless.

"My legacy is there. If nothing is going to change, I'll be there," he said.

"I just want to be focused on Saturday and try to win this amazing trophy."

Ronaldo's attacking partner Gareth Bale hopes Madrid's recent experience of winning the competition will stand them in good stead against a Liverpool side who last reached this stage in 2007.

"We believe in ourselves. We know we're a good team and we know how to win, even when we're playing bad," said the Wales international.

"We know how to get the job done. We have that experience in big games. It'll be the same on Saturday: we know how to deal with the nerves, how to win a final."