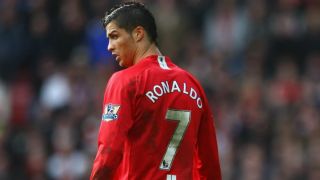 Cristiano Ronaldo revealed he was "petrified" to take the number seven shirt at Manchester United when he joined the club in 2003.

Alex Ferguson purchased the winger from Sporting CP for just £12.2million, urging him to take the number vacated by David Beckham who was sold to Real Madrid.

Ronaldo was initially unconvinced about taking the number, wanting 28 instead, but Ferguson persuaded the Portugal international to take on the responsibility of the number seven.

"I was petrified as I knew Beckham wore that shirt. But I took on the challenge and since then it has been my lucky number.

"I have won everything in football with that shirt."

The only season Ronaldo has not worn number seven was when he first joined Madrid in 2009, taking the number nine instead, before Raul left the club a year later to vacate his lucky number.