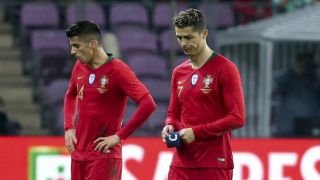 Cristiano Ronaldo's move from Real Madrid to Juventus was set in motion when the Bianconeri began their approach for Valencia right-back Joao Cancelo, revealed Giuseppe Marotta.

Cancelo joined Juve for €40.4million last month, and negotiations with the defender's agent Jorge Mendes opened up the possibility of a sensational swoop for five-time Ballon d'Or winner Ronaldo, another of his clients.

The Portugal captain explained a desire to start a "new cycle" in a farewell letter to Madrid, published prior to the Turin giants announcing they had shelled out €112m to sign the prolific forward on a four-year deal.

Juve chief executive Marotta detailed how the blockbuster move came to fruition in an interview with Corriere della Sera.

"It was a great team performance. I'm very happy," said Marotta. "The real stars of this team are the Juventus players and shareholders.

"When we realised that we could seize this opportunity, the shareholders agreed to support the club.

"It all started with the deal for Cancelo, who has the same agent as Ronaldo - Jorge Mendes.

"We want to express maximum satisfaction and happiness at signing Cristiano and his decision to come to Juventus.

"Cristiano is very happy to play for one of the biggest clubs in the world. He has already decided where he will live - a beautiful penthouse in the centre of Turin."