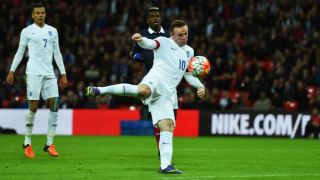 Wayne Rooney will not go down in history as one of England's all-time greatest forwards, according to national icon Gordon Banks.

Rooney overtook Bobby Charlton to become the highest scoring player in England's history with his 50th international goal against Switzerland in Euro 2016 qualifying, adding another to his tally in the 2-0 win over France in November.

However, Banks does not believe the Manchester United captain will warrant the same level of recognition as his 1966 World Cup-winning team-mate when his career comes to an end.

World Cup-winning goalkeeper Banks thinks Rooney's inconsistent form has stopped him making an equivalent impact to those who have gone before him.

"This last year he's sort of been up and down. He's played well and scored one or two goals but then he goes off for a few weeks and you wouldn't even know he's on the field," said the 78-year-old.

"He's got to give it the 90 minutes every time he plays to help the team, but we need someone of his experience in the team, so we really need him to get right.

"For me, he will never be the sort of player like Bobby Charlton or one or two more like that. This guy scored some magnificent goals, really played well and created goals too."

However, Banks was effusive in his praise of Stoke City - where he played between 1967 and 1972 - goalkeeper Jack Butland, who he thinks is pushing Joe Hart for a starting spot at the European Championship which gets underway in June.

"Butland is doing absolutely marvellous. He's got a great chance, he's putting Joe Hart under pressure. He is playing terrific," he added.

However, if England are to have a successful campaign in France, Banks suggested they could take lessons from the spirit of the 1966 squad.

"It's always hard to say in football, you never know what's going to happen, but they've got to start doing what we did and that's give 100 per cent, help each other when they're out there, play as a team and get together and get some games won," said Banks.