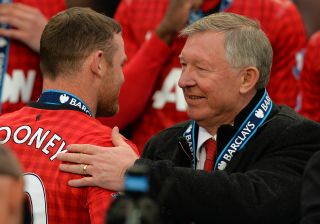 Ferguson released his second autobiography this week, lifting the lid on a number of explosive incidents from his decorated time at Old Trafford, including the much-publicised issue over Rooney's future at the end of his final season in charge.

The Scot dropped Rooney for the conclusion of United's title-winning campaign last term and subsequently suggested in a live television interview that the England international had asked to leave the club, prompting a lengthy transfer saga and links with a potential move to Chelsea.

But while he has now confirmed Rooney's desire for a move in his autobiography, Ferguson underlined in media interviews to promote the book's release earlier this week that the player did not hand in a formal written request.

And after the former Everton man inspired United to a 1-0 UEFA Champions League triumph over Real Sociedad on Wednesday, Rooney revealed he was happy to draw a line under the issue following Ferguson's clarification.

Speaking after the match, Rooney told Sky Sports: "He's got his own opinion but all along I've not really said anything about it and thankfully he's come back and corrected the story that I put a transfer request in - he's gone back and proved that I haven't so I'm thankful to him for that."

Asked whether Ferguson's current status as a director at the club was problematic as he continues his United career under new manager David Moyes, Rooney revealed that he has had no dealings with his ex-boss since he left the Old Trafford dugout.

"I haven't seen him since he retired," the England man added.

"I'm happy under the new management and I’m working to get goals under David Moyes and his coaching staff. That's the main thing for me."

On the prospect of making a fuller public response to Ferguson's book, Rooney added: "No, not at all. I'm just happy playing my football at the minute.

"That's the past and I'm looking forward to the future."