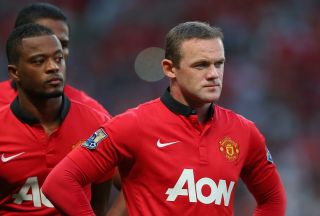 Rooney's future has been shrouded in doubt since the end of the 2012-13 season when then-United boss Alex Ferguson revealed the forward had handed in a transfer request.

Chelsea boss Jose Mourinho subsequently went public with his desire to land the England international, but saw two bids rejected amid David Moyes' protestations that the Old Trafford outfit had no desire to sell.

Despite his alleged ambition to seal a move to Stamford Bridge, the 27-year-old was well received throughout the Premier League meeting between Chelsea and United.

And he has now taken to his official Facebook profile to express his gratitude, writing: "Here’s some pictures from Monday night’s game. It was an unbelievable reaction from the fans, so thank you. I really appreciate your support. It means a lot."

Rooney has scored 197 goals for Manchester United since joining the club from Everton in August 2004.

However, the forward reportedly set his sights on a departure after failing to start last season's UEFA Champions League last-16 second-leg defeat to Real Madrid.