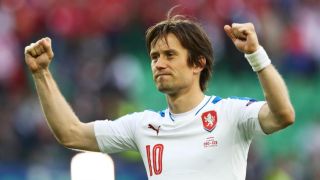 Tomas Rosicky has completed his return to Sparta Prague on a two-year deal, the Czech side have confirmed.

Rosicky started his professional career with Sparta before making a move to Borussia Dortmund in January 2001.

After excelling in Germany, where he won the Bundesliga in the 2001-2002 season, Rosicky made the switch to Arsenal in 2006.

He spent 10 years with Arsene Wenger's side, but was a free agent having been released at the end of the Premier League season.

The veteran midfielder, who has won over 100 caps for the Czech Republic, has now returned home to Sparta.

"I'm happy to be back," Rosicky said. "[Owner Daniel] Kretinsky had my word that I would return if I'm healthy.

"I'm not coming here just to play. I'm coming here to win. I'm starting to train with the team now, which is what I need right now.

"The coach [Zdenek] Scasny gave me my first chance in the top division. It's unbelievable we meet here again."

The legend is back!Tomáš Rosický returns to Sparta and signed a 2-year contract -> August 30, 2016

Kretinsky added he wants Rosicky to stay at the club after he retires from playing.

"We believe Tomas will help Sparta both on and off the pitch," the club's owner said. "He's an extraordinary personality.

"Tomas should focus on his player role now, but I hope he'll continue at Sparta even after the end of his career."