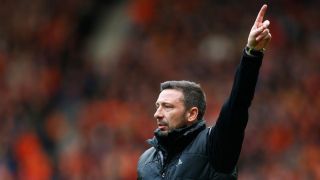 Ian McShane put Ross County into the lead from a free-kick after Reynolds brought down Alex Schalk, but Adam Rooney equalised with a penalty before Shay Logan struck either side of half-time to put Derek McInnes' men in control.

McShane gave the hosts hope of mounting a late comeback by thumping home a 20-yard drive with eight minutes to go, but the Dons held firm to extend their unbeaten run to nine league matches.

An early pitch inspection passed the Dingwall surface fit to play on, but Ross County were without Liam Boyce as the 17-goal striker's broken hand continues to keep him out of action.

Reynolds saw red after just 26 minutes when he brought down Schalk on the edge of the box, McShane stepping up to hit the free-kick beyond Scott Brown in the Dons goal.

But the 10 men responded strongly and Rooney's 15th goal of the season soon levelled the scores before Logan bundled Aberdeen ahead.

Logan struck again on the hour-mark to extend the lead before McShane set up a grandstand finish, but Aberdeen held on to increase the pressure on Ronny Deila's Celtic.