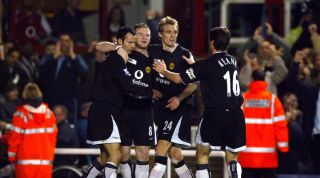 Roy Keane has revealed more about his famous 2005 spat with Patrick Vieira in the Highbury tunnel.

The Manchester United captain clashed with his Arsenal counterpart ahead of a midweek Premier League meeting in February.

After the pre-match warm-ups, Vieira confronted Gary Neville over United's treatment of Jose Antonio Reyes in the reverse fixture at Old Trafford.

When Keane learned that the Frenchman had exchanged words with his team-mate, he leapt to Neville's defence.

"People look back on my career… I wasn’t really into that argy-bargy stuff in the tunnels and threatening people. It wasn’t my scene," Keane told Off The Ball.

"But when I see lads almost picking on somebody – and I don’t just mean on Nev. There were three or four of them, Martin Keown and people like that.

"That irritated me. It was more the bullying than getting stuck into each other on the pitch. I think if you have any aggro with anybody, you bring it out onto the pitch.

"The most important thing about that night was that we went on to win the game. There's no point doing all this carry-on in the tunnel and then going out and getting beaten. So the key was to win the match and just put Arsenal, one or two lads, in their place."

Despite their 4-2 victory, United finished six points behind second-place Arsenal in 2004/05.