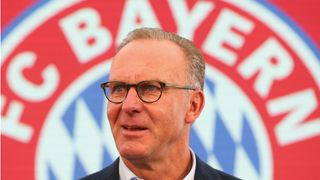 Martinez has damaged his knee ligaments, while Boateng is expected to be out for around three months with a groin muscle tear.

But Rummenigge says Bayern will not move to bring in cover before the transfer window closes on Monday.

"It is rather impossible that we do something. It is not to be assumed," Rummenigge told Sky.

"Quality is not actually on the market.

"There are no good players that are submitted by good clubs in the winter period."

Rummenigge added that the injury sustained by Martinez is not serious.

"It will be a matter of weeks rather than months," he confirmed.

With Martinez and Boateng unavailable, Xabi Alonso played alongside Holger Badstuber in Bayern's defence during Sunday's 2-0 home win against Hoffenheim.