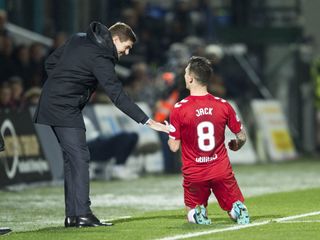 Ryan Jack insists it is full speed ahead for Rangers as boss Steven Gerrard refuses to take his foot off the accelerator.

Rangers surged to the top of the Scottish Premiership with a 3-0 win over St Johnstone on Wednesday night and have now recorded three wins from three, scoring seven goals and conceding none.

But that was not enough to please Gerrard, with the perfectionist boss hitting out at his “sloppy” team as they failed to turn their dominance into further goals in the last 30 minutes.

Jack says no one is griping about the manager’s strict stance in the Ibrox dressing room, however.

The midfielder believes Rangers will only handle the twists and turns of the long race ahead if they maintain the high standards they showed to beat Saints with goals from Borna Barisic, Ryan Kent and Joe Aribo.

Jack said: “I think we’ve been building good momentum. The pre-season games over in France with the quality we were playing against helped us with the fitness side of it.

“Coming back domestically, we’re going in with the mentality that we want to win and we’ve started off well.

“Even on the back of the second half on Wednesday night he was in the changing room, pushing us, wanting more, wanting better performances.

“We’re pleased with the start we’ve made but there’s a long way to go.

“The manager wasn’t pleased with our second-half performance even though we won but that’s just what happens when you’re at a big club. The gaffer has said that to us from day one of pre-season, he’s going to be on us every day.

“There’s no room to take our foot of it. We’re only a good team when we’re at it and at it every day.

“He’ll remind us of that again and I’m sure if he does, we’ll take it into Sunday.

“Obviously you’re 3-0 up so circumstances change. We made some subs and it’s hard to keep that momentum for the full 90 minutes.

“It’s another big three points and moves us onto Sunday which will be another tough test.”

But they have also opened up a five-point lead over Celtic, who were grounded by order of the Scottish Government on the back of Boli Bolingoli’s unauthorised trip to Spain.

The gap could be stretched to 11 by the time Neil Lennon’s 10-in-a-row chasers are back in action a week on Saturday at Tannadice if Rangers can protect their 100 per cent record when facing Livingston and Kilmarnock.

But Jack has no idea if building such a big early lead will make a difference come the final stretch of the season.