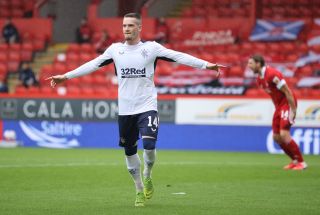 Ryan Kent got Rangers up and running as Steven Gerrard’s team opened the new Scottish Premiership campaign with a 1-0 win at Aberdeen.

After 142 days in lockdown, the Ibrox side got off to just the start they were looking for on their return to competitive action for the first time since March’s Europa League defeat by Bayer Leverkusen.

The visitors dominated the opening half and got their reward 21 minutes in as Kent broke clear to fire the only goal.

The second period was more of a grind but Gerrard will just be relieved to see his side avoid a repeat of their opening-day slip-up in the Granite City from two years ago as they set their sights on halting Celtic’s push for 10 in a row.

Gerrard was satisfied Alfredo Morelos’ focus had not shifted away from his present employers despite heavy speculation about a potential move to Lille this week, with the Colombian trusted to start.

But George Edmundson found himself dropping to the bench as Leon Balogun came in for his Rangers debut.

A sore bash to the head after he collided with a post, it proved to be an easier introduction to Scottish football than the former Wigan centre-back may have expected, with last season’s top Dons scorer Sam Cosgrove ruled out with a knee injury.

Youngster Bruce Anderson, whose equaliser denied Gerrard a first league win as Rangers boss here in 2018, got the nod to lead the line for McInnes’ team ahead of new Leeds loanee Ryan Edmondson.

But the 21-year-old managed barely five touches of the ball in the opening 45 minutes as the Light Blues took control.

For all their possession, however, it took 21 minutes for Rangers to create the game’s first chance – but Kent made it count.

Ianis Hagi dummied a James Tavernier ball, leaving Morelos to collect. With Scott McKenna fooled by Hagi’s movement, the striker had time to turn and prod the ball on for Kent, who beat the offside trap before racing through to coolly finish past Joe Lewis.

But the goalscorer was a lucky man nine minutes later as he was stripped of possession inside his own box. Aberdeen worked the ball to Funso Ojo 20 yards out but the sting was taken out of the Belgian’s strike by a Balogun block.

Lewis pulled off another routine save from a Hagi strike before half-time but Gerrard would have been quietly content with his side’s first 45 minutes back in action.

The second half was not quite as comfortable a watch, however.

The Dons upped their work rate, forcing the visitors to rush their passes – with Hagi twice wasting opportunities to cut through.

And there was worried looks on the Rangers bench when Balogun’s face smashed into a post as he tangled with McKenna at a corner. Thankfully there was no serious damage and the Nigerian could continue.

Hagi’s deflected drive flew just wide while the Romanian was the instigator as he slid in Morelos, but the striker was frustrated as Taylor got in a vital block.

But Aberdeen’s hopes of piling the pressure on in the final stages were wrecked when Considine flew in on Arfield with studs showing, earning a straight red from referee Bobby Madden.