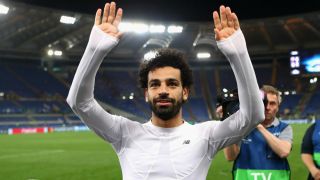 Liverpool's Mohamed Salah deserves to win the 2018 Ballon d'Or and can secure the prize with a match-winning Champions League final display, according to John Arne Riise.

Salah has enjoyed an astonishing first season at Anfield, scoring 44 goals in all competitions and helping Liverpool to the final of Europe's premier club tournament for the first time since 2007.

And Riise, part of that Reds team 11 years ago, believes Salah has already done enough to edge ahead of Cristiano Ronaldo and Lionel Messi in the running for football's top individual honour.

"[Salah] is so humble, he is so calm, he is always smiling. He gives his all for the team," Riise told Omnisport.

"This season, everything he has hit has been a goal. He is, for me, [deserving of] the Ballon d'Or this year. And if he wins the Champions League, or when - can I say when? - it will be 100 per cent sure.

"For me, he has been the best player this year."

Salah has dovetailed with fellow Liverpool stars Sadio Mane and Roberto Firmino, with Riise grateful that he has retired and is not required to take on a fearsome front three.

"It's hard to mark them because they keep changing positions and they're quick, they're technical, they can score goals, they can make assists for each other," he said.

"Plus they work together as a team and the front three is really powerful. I'm glad I'm retired and I don't play!

"They have to play the football they know best [in the final]. Our front three can hurt any team in the world and Madrid are going to be aware of that. Madrid can do the same.

"It's going to be a game, hopefully, with a lot of goals and, at the end, Liverpool are going to be the winners."