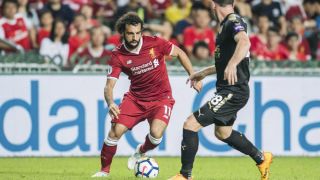 Mohamed Salah will make Premier League defenders despair during his first season at Liverpool, according to team-mate Joel Matip.

The former Chelsea winger signed for Jurgen Klopp's side from Roma last month in a club-record move that could reach a final value of €50million.

Salah, 25, adds to an attacking unit that already contains the likes of Philippe Coutinho, Sadio Mane, Roberto Firmino and Adam Lallana, a group Matip is happy he does not have to play against.

Matip told Omnisport: "Salah already played in England. He has high skills at dribbling, tempo and finishing and he makes defenders despair.

"There is so much quality [in attack], the right pace and it will be hard for our opponents to stop them."

Liverpool face hosts Bayern Munich in the Audi Cup on Tuesday as their pre-season campaign continues, Salah having scored in a 3-0 win over Hertha Berlin on Saturday.

Defender Matip elaborated on what it is like to play under Jurgen Klopp, having done so for the first time in a 2016-17 season which saw him make 29 Premier League appearances, as Liverpool finished fourth.

He said: "From every player [Klopp wants] fast counter-pressing with direct attacks, but also a clean and structured build-up with specific position-play.

"But of course, if we lose the ball, the first step is towards the ball and not back to defend at our box.

"We are defending very high. It begins with the strikers, who madly run [at] the opponent, putting in many meters and giving their all.

"It is hard to describe [Klopp's aura]. He is very affable and direct, even when it is about issues, he is straight but cordial. If you do something wrong he clearly tells you to do better but he stays affable."

Matip is unfazed by a new start to the top-flight season that includes clashes with Arsenal and Manchester City in the first four weeks and is also aware next month's Champions League play-off tie is a huge early season hurdle.

"That is why you play in the Premier League, to face such names and top players every week – it is something special," said the Cameroon international.

"The Champions League is what we have worked for last year. These are two important games and it will be a tough opponent. We have to put in everything for at least 180 minutes."

Asked about the prospect of a Europa League consolation prize, he added: "Everyone wishes to play Champions League, so do we. We focus on that mainly, stay positive and do everything to achieve that."