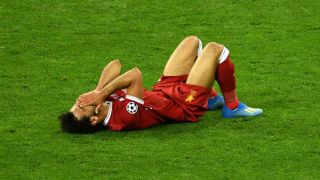 Salah was substituted after 30 minutes of Saturday's showpiece encounter in Kiev, having grappled with Madrid captain Sergio Ramos and landed heavily on the turf.

Gareth Bale came off the bench to steal the headlines with a game-changing overhead kick after Sadio Mane cancelled out Karim Benzema's opener – Reds goalkeeper Loris Karius culpable for the latter as he was Bale's second seven minutes from time in a 3-1 Madrid victory.

In his post-match interviews, Reds boss Jurgen Klopp expressed fears Salah would miss Russia 2018, but the Egyptian Football Association (EFA) tweeted a statement claiming there was "optimism" the Premier League Golden Boot winner would be fit for their Group A opener against Uruguay on June 15 after speaking to Liverpool officials.

Al-Sheikh holds a number of administrative roles, including chairman of the Saudi Arabia Sport Authority and president of the Sports Federation of Islamic Solidarity.

Until the end of last week he was an honorary president of Egyptian club Al-Ahly and is understood to have close links to the federation in the North African country.

Al-Sheikh used social media to give a message of support to Salah before the final but, in a Facebook post on Sunday, he claimed the 25-year-old's World Cup dream was over – at odds with the EFA's official line.

"With great sadness, sadly our great Arab star Mohamed Salah was confirmed in his absence [of] two months to injury, which means that he will miss the World Cup," he said. "We wish him a speedy recovery.

"I think that Liverpool will not allow Salah to take the cortisone because it is dangerous for the player in the long term and will press hard to complete the treatment for two months, which unfortunately means that we will not see the star Mohamed Salah in the World Cup."

Saudi Arabia have also been drawn in Egypt's World Cup group alongside hosts Russia and Al-Sheikh caused controversy in March when, after Salah scored in a friendly versus Portugal, he tweeted to suggest it would be beneficial for the Liverpool favourite to miss the round-robin match against the Gulf state.

"When it comes to Twitter, I speak as fan and not as a minister," he told Four Four Two Arabia when discussing the incident this month.

"When I commented on the Saudi team, it was because of excitement. I may make mistakes and I might be right and I might be harsh in some of the terms I use.

"But when it comes to Mohamed Salah, he's a great Arab player and has allowed us to lift our heads high as Arabs. I am a fan.

"But what I wish is he wouldn't play against our team during that match [at the World Cup]. I want to miss him during this match, just this match."