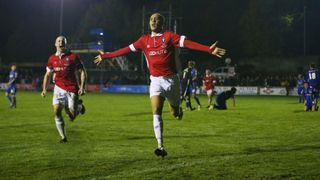 Salford City sprung a huge FA Cup shock as they put out League Two outfit Notts County with a 2-0 victory at Moor Lane.

Notts County are currently 15th in English football's fourth tier but were second-best for the majority of the match against the side from the Northern Premier League and found it hard to establish control on an uneven pitch.

Chances were few and far between in the first half but Webber put Salford ahead straight after half-time, as James Poole found space on the right before picking out the 33-year-old who bundled into an empty net.

Jordan Hulme burst through the visiting defence and rattled the crossbar from 12 yards but County almost snatched a leveller after Steve Howson's blocked clearance looked destined to trickle over the line, only for the defender to hook the ball wide of the post with a late lunge.

That moment proved pivotal as substitute Allen turned his way superbly past three defenders in the County area before exchanging passes with Hulme and slotting into the far bottom corner.

County pushed forward late on but Salford survived to book their place in the draw for the second round.