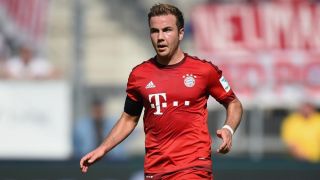 The Germany international has been linked with a possible reunion with former Borussia Dortmund boss Jurgen Klopp at Anfield.

But Sammer was brusque in his assessment of the latest talk surrounding the 23-year-old's future, telling Sport Bild: "Every day new nonsense comes along. That is all I am going to say on this."

Gotze has been continuing his rehabilitation work at Bayern's training camp in Doha, having been out of action since October due to a serious groin injury.

Sammer hopes Bayern can welcome him back to the first team soon but stressed "we must not take any risks there".

"We need to get into the best possible condition, physically and mentally, as soon as possible," he added.

Sammer had earlier dismissed the idea that only replicating the treble of 2013 would be enough to satisfy Bayern Munich's aims this season in what is Pep Guardiola's final campaign in charge.

"After 2013, we already have to bring home the treble again? I've never head such rubbish," he said.