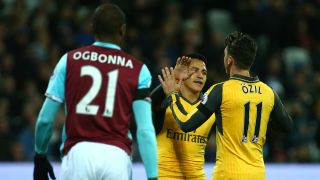 Alexis Sanchez and Mesut Ozil's performances for Arsenal over recent weeks lead Arsene Wenger to believe they want to stay at the club.

The attacking duo are out of contract next year and are yet to sign reportedly lucrative terms to remain at Emirates Stadium.

Chile forward Sanchez has been extensively linked with a move, while Germany playmaker Ozil came in for sustained criticism for a series of anonymous displays during the Gunners' February and March slump.

But a run of six wins from the past seven Premier League games has preserved Arsenal's hopes of a top-four finish heading into the final weekend of the season, although Wenger's men – who welcome Everton – need Liverpool to slip up at home to Middlesbrough.

Sanchez's brace in Tuesday's 2-0 win over Sunderland took him 23 in the Premier League this term and both he and Ozil have double figures in terms of goals and assists across all competitions.

"I don't question the focus or determination because they turn up with strong performances," Wenger told a pre-match news conference as he rejected the suggestion that failing to qualify for the Champions League would be a decisive factor in either player's future."

He added: "No, because they are part of the results as well, like I am. First of all they are under contract and, secondly, they behave like they want to be at the club.

"They don't behave like players who are disinterested in the future of the club."

So boss, what are your thoughts on the recent form of these two?“In every game they turn up with strong performances” May 19, 2017

Centre-back Laurent Koscielny faces a late fitness test after sitting out the Sunderland game with a calf complaint and his return would provide welcome assistance in seeking to repel prolific Everton striker Romelu Lukaku.

The Belgium international has 24 Premier League goals this season and was poised for a final-day showdown with Sanchez for the golden boot before Tottenham's Harry Kane stole a march with his four-goal haul versus Leicester City on Thursday.

Wenger is an admirer of the 24-year-old's talents, but did not add him to the now infamous list of stellar names he claims to have tried and failed to bring to Arsenal.

"If you look at his record it's quite impressive and I believe that every big club who plays against him is conscious he can score a goal against you with his power and determination," said the Frenchman.

"I think no one has scored more goals in the Premier League as he did at his age.

"We were not really after him because he was at Chelsea and belonging to Chelsea."