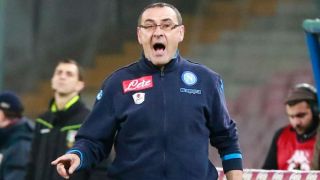 Napoli coach Maurizio Sarri has been given a two-game Coppa Italia suspension and a €20,000 fine for comments made to Inter counterpart Roberto Mancini during their quarter-final meeting on Tuesday.

Mancini and Sarri clashed on the touchline in the closing stages of their encounter at the San Paolo after goals from Stevan Jovetic and Adem Ljajic sent Inter into the last four with a 2-0 win.

The Inter coach alleged after the game that Sarri had directed Italian homophobic slurs "frocio" and "finocchio" towards him - describing the Napoli boss as "shameful" and "a racist".

Sarri, however, claimed he could not remember what he had said and claimed Mancini's accusations were over the top.

On Thursday, Lega Serie A declared its disciplinary decision to sanction the 57-year-old with a two-game ban and fine for "directing extremely insulting epithets at the coach of the opposing team".

Mancini also received a €5,000 fine for "leaving the technical area and taking an intimidating attitude toward the coach of the opposing team, who had insulted him" and being "disrespectful" to the fourth official after the game.

Sarri will serve his suspension from next season following Napoli's elimination from the competition.