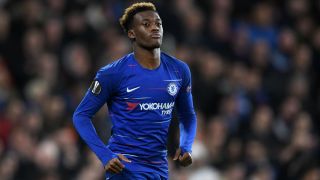 Maurizio Sarri suggested young Chelsea winger Callum Hudson-Odoi should be content with his playing time this season amid reports Bayern Munich are attempting to lure him to the Bundesliga and offer more first-team opportunities.

The 18-year-old is highly rated at Chelsea and played a key role in England's Under-17 World Cup success in 2017.

His team-mate from that England side, Jadon Sancho, has been a revelation for Bayern's title rivals Borussia Dortmund this season, having left Manchester City in search of first-team football in 2017.

Hudson-Odoi has made six appearances for Chelsea in all competitions this term, but only one was in the Premier League – a 42-minute outing against Watford on Boxing Day, in which he suffered a hamstring injury.

Bayern are said to have had a bid for him rejected by Chelsea, and Sarri is convinced the youngster cannot expect to be playing every week at his age.

"In Europe, there are few players, 18 [-year-old] players, with eight matches at this level," Sarri said.

Great performance from the boys, gutted to come off with a hamstring problem but I’ll come back stronger!! pic.twitter.com/0PFQo9MUYo— Callum Hudson-Odoi (@Calteck10) December 26, 2018

"So, Hudson-Odoi I think in this season played six, seven official matches in Europe, so I think that he has to be lucky. He is not lucky. He is good.

"I think that he is a very good player, the potential is for becoming a great player, and now he has to improve.

"With the ball, he is a very good player. He has to improve, I think, in movement without the ball. As a winger, he has to improve in the defensive phase, but he has the potential to become a very important player, not only for the English football I think but for the European football.

"It's not easy. It's not easy at this level to take the young players from the academy and he's ready to play, not only here, everywhere in Europe.

"Sometimes there is one, two young players in Barcelona, from the academy, sometimes one, two at Real Madrid, zero in Juventus, zero in Paris Saint-Germain.

"It's not easy, and I think that we are lucky because we have [Ethan] Ampadu, we have [Andreas] Christensen, we have Hudson-Odoi, so we are lucky.

"Take four players in the academy, we are really very lucky, or the academy is very good."