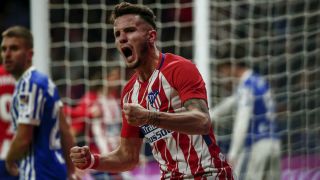 Atletico Madrid star Saul Niguez is proud to have been the subject of Barcelona interest but wants to stay and win trophies at the Wanda Metropolitano.

Atleti CEO Miguel Angel Gil Marin claimed last month he received an enquiry from the Catalans about Saul's availability, only to be put off by his reported release clause of €150million.

The 23-year-old says it is always encouraging to know other clubs are watching but insists he extended his contract in July last year with the intention of enjoying a spell of success in the capital.

"It's always positive that teams show interest in you," he told AS when asked about Barca's reported interest. "But I want to do good things at Atletico and that's the reason for my renewal.

"I wanted to continue here and that's why it was done. It was very simple. The idea is to grow with Atletico.

"When it looks like I'm stuck or I need a change, then we can talk about it. But I want to improve with Atletico and my goal is to compete until the end for trophies with Atletico Madrid."

Atletico begin 2018 in second place in LaLiga, nine points behind leaders Barca, and their first match of the year is a Copa del Rey clash with Lleida on Wednesday.

They also continue their European campaign in the somewhat unfamiliar territory of the Europa League, having finished third in their Champions League group behind Chelsea and Roma.

Although he admits it is disappointing to have dropped down into Europe's secondary competition, Saul says Atleti will give everything in a tournament they won in 2010 and 2012.

"The challenges are to compete for LaLiga, the Copa del Rey and to try to give our best in every competition. And, also, to fight for the Europa League," he said.

"We didn't expect to fight for this title at the start but now we are eager to go as far as possible.

"This team had the ambition to fight for the Champions League and it's clear that the Europa League isn't the same, but we know it's an important competition for everything it gave to us in the past."