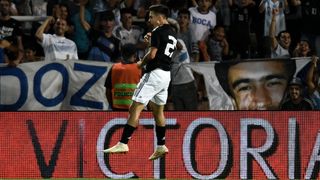 Goals from Icardi and Dybala helped Argentina to a 2-0 friendly win over Mexico in Mendoza on Tuesday.

It was Icardi's first in eight games, while Dybala struck for his country for the first time in his 18th appearance.

"We have to be happy because two players as important as Icardi and Dybala were unlocked," Scaloni said.

"They will give the fans a lot of joy."

Icardi produced a fine finish in the second minute to open the scoring, while the win was sealed by Dybala on the counter-attack.

Scaloni, who could be given the permanent job, was satisfied with his team's performance.

"It was difficult. We played with a lot of changes. We are happy because they all played, that was the goal," he said.

"I believe that with the changes the team let go more."